Square/cubes, circles/globes, cylinders, ellipses, and triangle/pyramid are the common forms that can be found in complex objects. Learning to correctly draw these shapes will improve your drawing skills. Many artists begin their drawings by looking for theses shapes inside of complex objects, and begin by drawing these shapes first. They then morph these shapes to create the more complex forms.

We will be drawing freehand. There are some great benefits to learning to draw freehand. Drawing without rulers or templates helps you build hand eye coordination and improves focus. Freehand drawing is also beneficial when drawing on location or when a ruler or template is not available for use.

Lines - Many people struggle to draw straight lines and uniform circles without using rulers, compasses, etc. Below are some tips that improve drawing accuracy. The most important way to improve drawing skills is to practice.

Straight Lines – Read the tips and practice them completing a full page of lines that move horizontally, vertically and diagonally.

Circles - Read the tips and practice them completing a full page of circles. Draw many different sizes. Circles may be placed inside of each other. A circle becomes a globe once shading has been added.

Drawing Squares, Rectangles, and Triangles
Most students understand the basic concepts of drawing these shapes. Practice will improve theses skills. Below are a few tips that will help improve drawing accuracy.


1. Cube
A cube is a three-dimensional square. The viewer will be able to see two or three sides depending on where the cube is positioned. Moving the cube up and down or side to side in front of your line of sight changes the number and amount of the sides you will be able to see. This concept can be used to draw both square and rectangular objects. A rectangle drawn in perspective is called a rectangular solid. Listed below are ways to draw a cube that has one side facing you (1 Point Perspective), and a cube that has been turned so that one corner is closer than the others (2 Point Perspective). For the purpose of this lesson, we will only cover some basic ideas about drawing a cube. Details about drawing in perspective will be covered in a later lesson. Read the tips and practice them completing a full page of cubes and rectangular solid shapes. 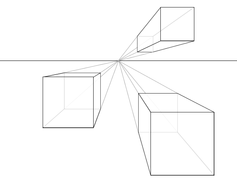 Side Facing the Viewer (1 Point Perspective)

Corner Facing Viewer - (2 Point Perspective)
Begin by imagining a wooden block lying on the table in front of you. It’s turned so that one of the top corners (vertices) is pointing toward you. It looks like a baseball diamond with home plate closest to you. If you look at just what you see, the distance between home plate and second base appears shorter than the distance from first base to third base, when in reality, they’re the same length. This is called foreshortening.

To draw the cube, start with home plate.

5.   Now, from 3rd, 1st and HP, draw 3 separate vertical lines. This centerline should be slightly longer than the sides
and all the lines should be as parallel as possible. See second figure. 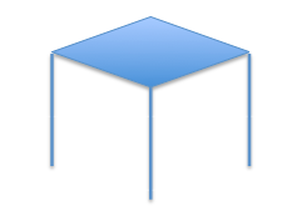 A cylinder is a geometric shape that has parallel sides and a circular cross section. Examples of a cylinder include cans, tubes, and pipes..

​The Ellipse
To create the rounded ends of a cylinder, you need to learn how to draw an ellipse. An ellipse is a circle seen in perspective or a circle viewed at an angle. Take a drinking glass or open can. Look directly down at the top of the glass and notice that the opening is perfectly round. Begin turning it vertically away from your body and toward the back wall. That perfect circle begins to look like an oval not a circle. The shape of the opening has not changed, just its position in space. Drawing an ellipse captures that change. The viewers point of view directly affects how narrow or wide the ellipse appears. The closer the rim of the glass is to eye level, the narrower the ellipse. If the glass rim is held directly in front of your eyes, it becomes a straight line.

The Cylinder
Read the tips and practice them completing a full page of cylinders. Draw lightly. After using the method below, try drawing a few cylinders without using any guidelines. You can start by drawing the ellipses and connecting them with vertical lines or start with the sides and fit the ellipse into the top and bottom opening. Try drawing cylinders lying on their sides, as well as, standing up. Check them by adding a middle axis line. ·       The sides of the cylinder are parallel
·       Avoid flat bottoms. Students usually round the top of a cylinder, but often make the bottom a straight line. This
occurs because the bottom of the cylinder is generally sitting on a surface making the curved line less obvious
·       Check for pointed edges. Remember the ellipse has rounded not pointed corners.
·       The cylinder should be symmetrical when a line is drawn down the center.
·       The top and bottom ellipses on a cylinder are not the exact same size, because they are viewed at different
eye levels. The longer the cylinder, the more pronounced the size difference becomes. 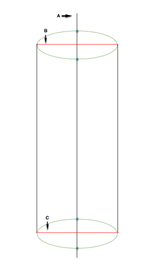 The Cone
A cone is a form that has a circular base with sides that taper up to a point or apex. The circular end of the cone is an ellipse. A perfect circle would only be drawn when the cone is viewed straight on from the bottom or apex. Read the tips and practice them completing a full page of cones. Try drawing some cones lying on their sides. Remember to keep the apex centered over the center of the ellipse. Draw with and without using guidelines. 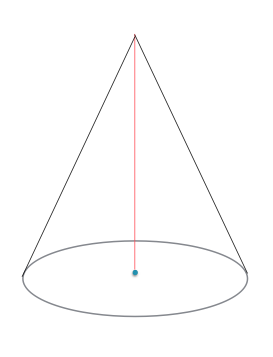