When you have completed your art piece, take a photo of your finished and turn it in to Canvas ​​
Self-Assessment

Wycinanki - Layered Paper Cut
History of Paper Cutting
Paper, as we think of it today, is attributed to China around 100 A.D. At some time during the fourth century, the Chinese started to cut paper embroidery patterns. Though these first artists were probably members of the royal entourage, paper cutting quickly became a folk art, one practiced not by royalty but by commoners. Their work served both decorative and utilitarian purposes.
From Asia, the knowledge of paper and cut work spread along trade routes until it reached the Middle East during the eighth century. By the 1500s, Turkey could boast of a guild devoted exclusively to the task of paper cutting. When this guild’s members filed past the Sultan during a ceremony in 1582, one observer noted that they displayed a portable garden made entirely of cut paper flowers.

Papermaking -- and cutting-- eventually filtered into Europe, and by the seventeenth century, paper cutters in Italy, Holland, Germany, and Switzerland were developing distinct regional cutting styles. Much of the early cut work from these countries was comprised of religious themes. Cloistered monks and nuns painstakingly created religious texts by hand-lettering, painting with some examples, boasting elaborate cut designs as well.
​
By the seventeenth century, German and Swiss Scherenschnitte, which literally means "scissor cuts" in German, had become a folk art form. Cutting techniques varied with some designs created from cutting folded paper while others were cut from flat sheets. The Swiss also developed a method of layering cut paper, though collage was not a predominant technique. Most Scherenschnitte was cut from black or white paper which depended on shape and contrast rather than color for its effect.
Scherenschnitte, continues today with the Dutch paper cutters recognized as some of the finest in the world.
Their work is unique with its spontaneity and variety, rather than by any single regional style. Dutch artists use scissors and cut on flat or folded paper, with as many different forms, subjects, and techniques in cut work as there are cutters.
http://alicut.com/History_of_Papercutting.html

1. Generating Ideas
Brainstorm ideas about the type, style and subject matter of paper cut you wish to create. Make a list of subject matter ideas. Think about colors and layers that work well together.

Watch Videos
3. Visual Development
Planning Sketches - 3
Decide what type of paper cut you are going to create (see the PPT for examples). Draw several sketches to show different ideas for a paper cut. Plan layers, color schemes, material choices, etc. You may use  scissors, an Xacto knife, or a combination of both to make your cuts. Practice on newspaper before beginning. Images may printed or drawn first then lay on top of your final paper. The image can then be cut by "tracing" it with scissors or a knife (cut through both layers).

Test Cut - Snowflake
Follow the directions below to cut out a snowflake. You may use scissors or an Xacto knife. Once you have cut and opened up your snowflake, take a photo of it and upload it to Schoology. 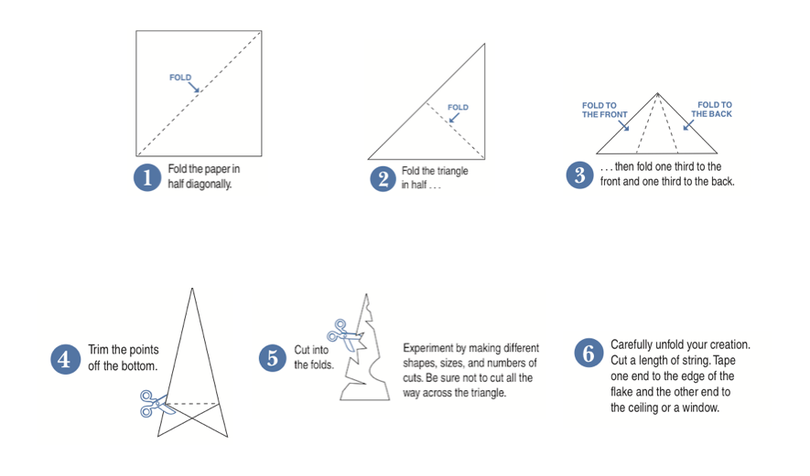 4. Final Design
Paper Cut Directions PPT (YOU MUST LOOK AT THIS BEFORE BEGINNING)
Paper Cutting PPT
5. Refinement
Go through and trim any areas that are roughly cut. Add more cuts to areas that are not complex enough. Re-glue loose edges and re-fold poorly folded areas. Ask a friend to look for areas that need to be cleaned up or improved.